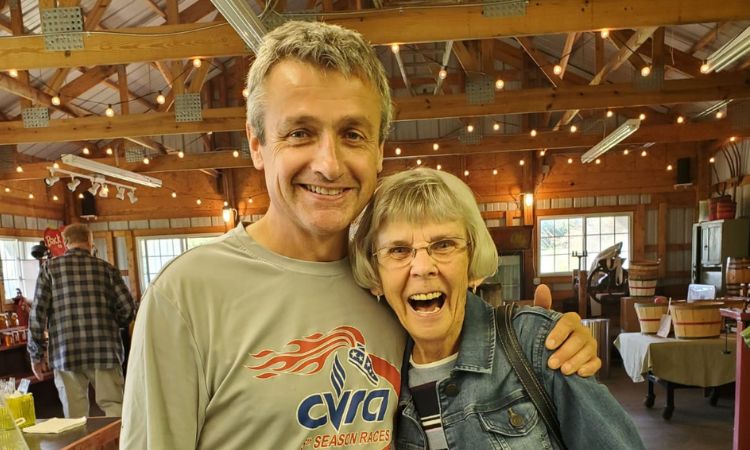 The first week of September was the season-opening at my family’s orchard. The Big Apple orchard is our happy place. Most of the time, it feels like we’re throwing a community party, with “new friends” welcomed to pop in, of course. We have had visitors from as far away as the UK, Europe, and Australia.

You never know who’s going to show up, which only adds to the fun. This past Sunday, a couple walked in and introduced themselves, and said they drove to visit the orchard from a few hours away. They were from my hometown! This was no coincidence. “So you’re Monte’s wife? We didn’t know he married a local,” said the woman. “I was his bus driver all through school. I recently retired after 49 years and this is my husband, who retired after 52 years of driving a school bus.”

In the back of my mind, I began connecting the dots. Over the years, my husband talked about his beloved bus driver, Mrs. Fish. How she always had a warm smile for him in the morning. How she cared how he was doing and could cheer him up on a tough day. How she gave the kids homemade popcorn balls on the last day before winter break. He also talked about his regret of not thanking Mrs. Fish when he didn’t ride the bus as planned at the end of his senior year. His recollections usually ended with something like, “She was a really good bus driver.”

And here was Mrs. (“call me Sandy!”) Fish saying, “We saw an article in the Iowa Farmer Today a few years ago about Monte starting The Big Apple. I came across that clipping yesterday and it was so much fun to read. After church today, the sun was shining and it seemed like a great day to go for a drive, so here we are. I want to surprise Monte – and see if he remembers me.”

I led them to the kitchen where Monte was preparing his special apple cider donuts. As you can imagine, the reunion was a joyous one!

As I listened to Sandy and Monte recounting memories from over the years (punctuated from each side with, “I can’t believe you remember that!”), I marveled at the difference this 82-year-old woman had made not only in my husband’s life, but in the lives of many children. Helping them feel welcomed and special for who they were. Allowing them space to grow. Meeting them again, year after year, as they developed from children to adolescents to teenagers. She was a trusted adult to many.

At one point in the conversation, my husband and Sandy discovered that her very first day as a bus driver was his very first day as a student. This was my time to chime in: “Wait!”, I said to Sandy. “This means that you and I met Monte the same day – that was our first day of kindergarten.”

Eyes sparkling, Sandy smiled, “I’m so happy I brought him safely to you.”

Making decisions in a ‘worldmaking’ way

Last month, I was chatting with a colleague...

The first week of September was the season-opening...

Moving through setbacks and adversity with kindness and grace

It has been a slog. Planning (and replanning)...

Amidst all of its challenges, the Covid-19 pandemic...

The first step in managing influences is being...

“It makes my heart sing to see how...

Being Human is Not a Solo Sport

Maybe it was my birthday turning the calendar...

Telling Our Stories Helps Us Share Our Losses and Heal

In a recent NY Times Opinion titled, “The...

“In This Moment” Blessing

Years ago, I interviewed Marci Shimoff upon the...

A few months ago, I received an email...

Sign up. Get newsletters, resources, offers and good stuff that I only share with my THRIVE community delivered to your inbox.

Making decisions in a ‘worldmaking’ way

Last month, I was chatting with a colleague...

The first week of September was the season-opening...